On March 26, 2015, more than five hundred years after his death, Richard III again was laid to rest at Leicester Cathedral.  This time, the Archbishop of Canterbury presided, and days before thousands of English had lined the streets with white roses, the symbol of the House of York.  Most are familiar with the popular image of this last Plantagenet king, the misshapen Machiavellian who ordered his nephews murdered after supposedly scheming his way on to the English throne.  Most also know about his death at Bosworth Field, the battle at which the victorious Henry Tudor claimed the crown, becoming Henry VII, ending the War of the Roses, and establishing the Tudor dynasty.  Now scholars are questioning Richard’s commonly accepted villainous image, wondering how much is fact and how much is a version written and promoted by the winning Tudor king?

William Shakespeare’s malignant image has done nothing for Richard’s reputation, of course.  Indeed, the majority of people, including me, have come to know him through the Bard’s play.  Peter Cook has great fun spoofing Sir Laurence Olivier’s black-wigged iteration in the first series of Black Adder.  Cook’s Richard was a loving uncle, eventually murdered by Black Adder himself.  Audiences laugh, however, noting the twists on both history and Shakespeare’s monumental tragedy.   But while knowledgeable about history, Shakespeare never intended to present accounts accurately in his History plays.  Academicians have catalogued the moments when Shakespeare sways from canonical lore, but perhaps he merely was referencing what was commonly accepted during his time?  In any event, Shakespeare wasn’t interested in presenting history per se.  He explores, among other things, themes involving politics and leadership.  Throughout these several plays Shakespeare teaches viewers and readers what makes a good king, Henry V being his paragon, and Richard III, well . . . not so much.  His reputation may have suffered, but so be it.

While pursuing graduate work at San Jose State University, it was my great pleasure to study with Arlene Okerlund, who demanded her students strictly adhere to Shakespeare’s texts when analyzing and forming hypotheses.  Why does she still remain a rigid adherent to this exacting methodology?  I can only quote how she’d answer whenever a bold classmate brought up historical variations within Shakespeare’s plays: “Shakespeare did not write as historians do.  He applied artistic license when necessary to amplify thematic meaning, to augment statements about human nature, about politics, about what makes an effective ruler.  In this sense, Shakespeare did not write history.  He wrote about human nature, and about human nature he wrote the truth!”

One can explore these truths about politics and leadership within Richard III through two films, the first starring and directed by Laurence Olivier and the second starring Ian McKellen and directed by Richard Loncraine.  Watch the Olivier version for its solid, traditional staging that incorporates Colley Cibber and David Garrick’s Eighteenth Century adaptations, both of which open with material from Henry VI, Part III to clarify historical contexts.  Due to the play’s length, both Olivier and Loncraine cut significant material, although Olivier’s is the longer by far.  Loncraine follows Richard Eyre’s stage production and sets his film in a 1930s fascist Britain, one that would bring abundant joy to Oswald Mosley and his British Union of Fascists.  Other than lines and plot, viewers hardly recognize anything Shakespearean at all.  In the end, however, I cannot lie.  Olivier is wonderful, but I prefer Loncraine and McKellen.  Here’s why. 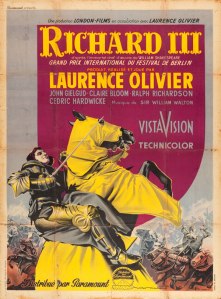 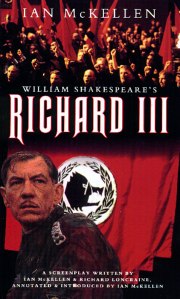 Olivier goes for the standard approach, alone on stage, speaking directly to the audience.  There’s nothing inherently wrong with his style.  In fact, it’s an outstanding delivery.  He outlines the political situation while making us unwitting abettors in his wicked plans against his brothers and any who would block his path to the throne.   He slithers across stage, casting shadows, and gazes into his mirror to embolden the text.  We see the evil he reveals later to the others when it is too late.  We become witnesses who can’t warn the victims.

McKellen accomplishes the above but with enhanced brio.  The first thirteen lines are delivered as part of a congratulatory speech to his brother, Edward IV, whom he has helped to wrest the crown from Henry VI.  He preens while puffing on a cigarette and the champagne-soaked audience smiles and laughs before him.  Then suddenly he’s in a men’s room, foregoing praise for treachery and connivance.  Like Olivier, he reveals his true self, tacitly enlisting us into his plan, but more effectively so.  How many men’s rooms in the corporate world have been turned into secret meeting rooms in any given industrialized nation?  Signs on WC doors around the world should read, “Men’s Room: For Pissing and Dirty Politics.”  Eyre, Loncraine, and McKellen exploit this truism with frightening success.  The turn on stage expertly matches the turn within Shakespeare’s monologue.

And McKellen’s mastery with breaking the fourth wall!   He urinates, his cigarette dangling from his mouth, glancing over his shoulder at the camera, at us, as he reveals the darkness within.  I shuddered equally when watching Francis Urquhart, portrayed by Ian Richardson, leer conspiratorially after betraying one colleague or another in House of Cards.  The staging, the acting, the physical symbolism all blend to enhance character and theme much more poignantly here.  Props to Sir Laurence, but bravo, Sir Ian!  Bravo!

Olivier cut thematically essential female characters from his production.  In a 1995 interview with Movietimes.com, McKellen states about Olivier’s Richard III, “I was astonished to see what he’d cut out.”  It’s not just one-man show about a charismatic jolly villain, it’s about a whole group of power brokers and would-be powerful people, the setting in which Richard moves.”   Richard’s mother, played by Maggie Smith in the Loncraine/McKellen film, completely vanishes from the Olivier production.  About this McKellen opines, “When you don’t see her telling her son ‘I hope you die,’ you’re missing a part of the psychological truth of it all. And the scene where Richard tries to repeat his success with Lady Anne, by asking Queen Elizabeth for the hand of her daughter, is also gone.”

In her essay, “The Women of William Shakespeare’s Richard III, Jone Johnson Lewis outlines the importance of these characters in relation to political and historical themes”:

These women have lost husbands, sons, fathers, or will by the end of the play. Most have been pawns in the marriage game, but nearly all of them who are depicted have had some  direct influence on the politics. Margaret (Margaret of Anjou) led armies. Queen Elizabeth (Elizabeth Woodville) promoted her own family’s fortunes, making her responsible for the enmity she earned. The Duchess of York (Cecily Neville) and her brother (Warwick, the Kingmaker) were angry enough when Elizabeth married Edward that Warwick changed his support to Henry VI, and the Duchess left court and had little contact with her son, Edward, before his death. Anne Neville’s marriages linked her first with the Lancastrian heir apparent and then with a Yorkist heir. Even little Elizabeth (Elizabeth of York) by her very existence holds power: once her brothers, the “Princes in the Tower,” are dispatched, the king who marries her has locked up a tighter claim on the crown, though Richard has declared Elizabeth Woodville’s marriage to Edward IV invalid and therefore Elizabeth of York illegitimate.

Although not strictly a historian Shakespeare understood how these women were important not only to history, but also to the themes of his play.  I share McKellen’s shock.  His version cuts substantially more material than Olivier’s, but at least women receive their due credit.

That Shakespeare’s play is so readily adaptable to a fascist Britain speaks to its timelessness.  All hail producers who strive to recast any of his wonders into more contemporary or even experimental settings!   Viewers must see traditional works to understand Shakespeare in his time, but adaptations reveal how his themes stand true in any time.  I walked away from Olivier’s effort understanding the tragedy intellectually, but Loncraine’s opus brought that understanding straight to my heart, because the contextual design and visuals were closer to my generation.  If you’re in the mood for binge-viewing, put away Arrow or Game of Thrones and pick up these two perspectives on a classic.  Olivier will lay the foundation, but Loncraine and McKellen with their still largely contemporary take will prove more accessible and thus more powerful, building an understanding of history, politics, and leadership applicable throughout many lifetimes.

One thought on “A Richard III for Our Generation”