My excellent friend the Hugo-Award winning Maurine Starkey reconnected me with a significant artifact from my childhood, Jim Steranko’s two-volume History of Comics.  My first copies disappeared from my father’s storage warehouse during the 1980s, along with a large portion of my library.  Online agencies – eBay, for example — have helped many to acquire or reacquire treasures easily, but the thought of replacing anything had never occurred to me, since I possessed nothing overly valuable in what was lost.  Regarding Steranko’s History, its large tabloid format and fragility make safe and comfortable reading nearly impossible.   I wish Steranko would release reprint editions in a manageable format, but given that each contains pages with four columns of text apiece I can’t imagine how this would translate respectfully.  Additionally, Steranko includes an abundance of art.   Let’s not forget those wonderful wraparound illustrations he crafted for the covers. 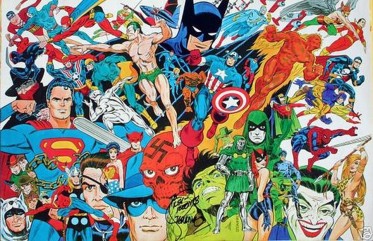 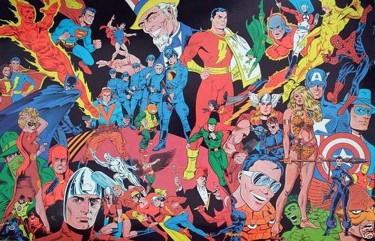 Then while surfing Facebook, I landed on a photo Maurine posted of, yes, Steranko’s opus!  A longing entered my heart, and I began negotiations – well, I paid her more than she asked, because fair is fair, so screw negotiations.  It doesn’t matter that these copies have been “well loved,” or that one volume is a second edition.  Steranko imparts priceless information.  A revolutionary artist, writer, and publisher, he imbues his scholarship with reverence, and thus he’s not shy with details.  Originally, the plan called for six volumes.  A friend reports that Steranko has admitted a third will appear, but I need to verify this alleged announcement.  One hopes.

Per my agreement with the gracious seller, I will only enjoy History at my dining room table, where I can lay them flat and turn the pages slowly.  My tolerance for difficulties with physical reading comfort has improved, it seems.  Immediately, I was reminded that Volume One canvasses early comic strips; pulps; Superman, Batman, and other DC (technically National) heroes; and Captain America and other Timely characters.  Federico Fellini wrote a preface in which he briefly contrasts Fascism with Alex Raymond’s Flash Gordon:

Fascism, it is true, relied on boldness, on the necessity to dare, fight and win, but were only fastidious words, and those who proclaimed such virtues were not really appealing.  Flash Gordon, instead, appeared instantly as a model of a hero insuperable, a real hero, even if his achievements were in remote and fantastic worlds.

But the best statement comes from Steranko himself: “The dream was always there.”

In Volume Two, Steranko concerns himself with Golden Age titles from Fawcett and Quality.  He devotes entire sections to Captain Marvel, Black Hawk, Plastic Man, and Will Eisner’s The Spirit.  Truly, I’ve yet to encounter a greater paean to Eisner, but to C. C. Beck, Bill Parker, Jack Cole, and others. He introduced me to heroes that DC obtained during the 1970s and incorporated into its continuity of multiple Earths.  Fawcett produced, for instance, Captain Marvel, Bulletman and Bulletgirl, Ibis the Invincible, Spy Smasher, and Mr. Scarlet and Pinky. From Quality came Plastic Man, Uncle Sam, Black Hawk, Doll Man, The Black Condor, The Phantom Lady, The Human Bomb, and The Ray.  Anyone interested in Quality Comics should pick up The Quality Companion: Celebrating the Forgotten Publisher of Plastic Man by Mike Koonian and Jim Amash.  Oh, and Steranko begins Volume Two with a paraphrase of his opener from Volume One: “It started as a dream.”   He may be trying to tell us something.

I’d received my first copies History as a gift for Christmas 1972.  I remember my mother telling my aunt about her trip to Bob Sidebottom’s Comic Collector Shop on San Fernando Street in Downtown San Jose to purchase this and other gifts for me.  She wasn’t convinced of Bob’s sobriety, so I bless her for allowing me to visit that legendary store until its eventual demise.  Today comic shops dot the landscape, and pop culture and comics studies have become booming enterprises.  I now own shelves filled with studies of comics in general, as well as of specific heroes, writers, artists, and publishing companies.  How thrilled I am, however, that Jim Steranko’s seminal effort has returned to occupy an honored place in my home. Again, thank you very much, Mo. May the dream be there always for both of us.